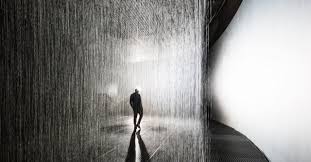 ​Tell me, what is the first thing that comes out of our mouths when we see someone close to us in a very terrible position? Maybe a friend, a colleague, or a loved one stuck in somewhat an impossible mess, and they look to us for answers. Tell me, what are the right words to say?

You see, all it takes is the splinter of a second for people’s lives to fall to shreds, for dreams to be squashed, hope eviscerated, and hearts broken. Most times, some may not even know of the amount of shit stored in their bodies and lives, and all it requires is just one wrong moment or a piece of bad news to uncover the blind. And at this point, they look on us for the right words.

I remember visiting a friend who had just lost her husband in a terrible accident after just a year of getting married, and the truth was that her world was turned upside down. Crying her eyes out, she was surrounded by people who tried comforting her, telling her everything would be okay, while I stood at a corner, wishing that they knew those words were the right kind of wrong thing to say at the moment.

Quite frankly, by default, the first and only thing that comes out of our mouths are the words, “It is alright”, or the alternative, “It will be alright”, as an assurance, to probably ourselves, for situations that are quite incomprehensible or out of control, but the truth is, so many times, it is never really alright, and neither does it turn out to be alright, not even by a long shot..

Saying it is alright is just a way to fool ourselves into thinking that whatever had happened, was just a blip on the radar, or something that would just sort itself out in due course, but what we never really understand is that people don’t want to hear those words when they hurt. For God’s sake, they are going a terrible thing, and they running to you for comfort is not for you to make them feel like a fool for feeling depressed, or try to make them ignore or minimize the pains in their hearts and minds, but they coming to you is for them to feel that there is someone out there who understands the pains they feel and will be by their side, each step of the way, till they come out of that dark place.

Seriously, it is okay to tell them, Damn, this is all messed up and crazy, and probably one of the worst thing I have seen or heard, not because the problem looks insurmountable, but because you are placing your legs in their shoes.

It is not a sign of weakness to admit something is terribly wrong, or that a situation is so messed up and crazy, and that there is nothing you would say that could probably change the situation, no, it is not weakness at all, but the greatest gift you can give someone who is on the verge of depression is the assurance that you will be there to help them sail through the dark and stormy sea.

I know we all want to be that strong individual that people run to for all the right words and reasons, but at times, being that person often requires us to share in their pains and nightmares, feel the same horrors of their demons, and give them the sense that they are never alone in whatever they go through. At times, being that person requires us to make them trust that we can relate with their predicament, and still be the strong hand that leads them through the dark forest.

People, in their worst or going through their worst, don’t scream at the world because they think the world will solve their problems, no, they scream because they want a companion, they want to hear someone say, I am here with you, and not it is alright or will be alright. If it was alright, then they will begin to question the pains they feel, and even question if they are entitled to feel any pain. The truth is, they don’t want their pain to be ignored, rather, they want it to be shared.

But life goes on, you may say.

Yes truly, life does go on, and they know, but they need time to come to that point of reality, and it is our duty to bring them there slowly.

And no matter the pain or struggle, they will one day start to understand that life goes on, and things will be alright, eventually, without feeling the same, but the road to that point will be rough, so they will require patience and help to get through.

So if you are heart broken, it is not alright.

If your business fails, it is not alright.

If your world is crashing, it is not alright.

But hey, you will get through.