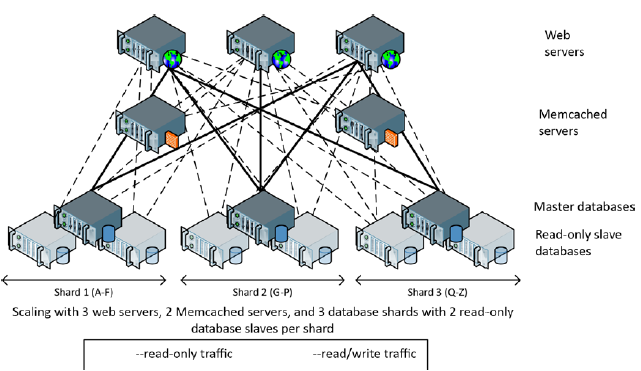 Relational databases have been around for a while now. It was necessitated with the emergence of web technologies. From its advance in 1995 to its cusp in 2005, it remained a stable and more or less the center piece of the web the revolution. But behind the scenes things were churning, especially with the arrival of web 2.0 and and the need of massive processing capability for big data. This was the age of Amazon, the largest retail operator of the time, arguably with a huge web presence.  While web 1.0 was a collection of statically linked pages, web 2.0 was all about dynamic content and its necessity to search and index these pages with transnational capabilities

Amazon, in it’s early days used  Common Gateway Interface (CGI) to facilitate user interaction.  CGI allowed an HTTP request to invoke a script rather than display a HTML page. Scripts written in pearl were used to access the database and generate pages on the fly. As technology progressed CGI gave way to frameworks such as Java’s J2EE and ASP.NET along with PHP (that followed the CGI model). Despite these advances the basic pattern for for data access, retrieval and rendering of dynamic pages remained unchanged.

At this juncture, scaling was not a big issue, a bottle neck in the client /server or web/server layer could as easily be fixed by piling on more internet servers to meet the rising demands in traffic. However fixing  a bottleneck at the database layer was not so simple. Like the web / server fix, in the early days , these issues were fixed by upgrading to the latest and greatest  hardware, operating systems and databases and what have you.

With the crash of the internet bubble, two realities came into play

MySQL is less scalable than Oracle & generally runs on less powerful hardware and is not very good at taking advantage of multi-core processors, but the development community   came up with some nifty tricks to enhance the value of MySQL .

Memcached and read replication increased the overall capacity of MySQL-based web applications dramatically. While the read capabilities of a system can  be improved using these methods, database write activities required a more dramatic solution.

Sharding allows a logical database to be partitioned across multiple physical servers.
In a sharded application, the largest tables are partitioned across multiple database servers. Each partition is referred to as a shard. This partitioning is based on a Key Value, such as a user ID. When operating on a particular record, the application must determine which shard will contain the data and then send the SQL to the appropriate server. Sharding is a solution used in large scale applications like Twitter and Facebook.

In this example, there are three shards, and for simplicity’s sake, the shards are labeled by first letter of the primary key. As a result, we might imagine that rows with the key GUY are in shard 2, while key BOB would be allocated to shard 1. In practice, it is more likely that the primary key would be hashed to ensure even distribution of keys to servers.

Sharding involves significant operational complexities and compromises, but it is a proven technique for achieving data processing on a massive scale. Sharding is simple in concept but incredibly complex in practice. The application must contain logic that understands the location of any particular piece of data and the logic to route requests to the correct shard. Sharding is usually associated with rapid growth, so this routing needs to be dynamic. Requests that can only be satisfied by accessing more than one shard thus need complex coding as well, whereas on a nonsharded database a single SQL statement might suffice.

Death by a Thousand Shards

Sharding—together with caching and replication—is arguably the only way to scale a relational database to massive web use. However, the operational costs of sharding are huge. Among the drawbacks of a sharding strategy are: